DeadWhale
comics happle tea Loki magic
From the author:
Loki has done some really weird shit. Who even knows why he does the things he does? One time, he dressed up like a woman with Thor to help get back his hammer. Another time, he leashed a goat to his balls just to get a laugh out of a lady.
I’m just saying, if there’s a figure in mythology that should really avoid judging other people, it’s Loki.
This little scene is from a bit of Norse myth called Lokasenna, The Binding of Loki (Loki’s Flyting, Loki’s Quarrel). The story seems to be a late addition to Norse myth (or at the very least, one that was not very popular) and tells of the gods’ quarrel with Loki, the Sly One. In it, the gods assemble to discuss matters in their hall. Loki, hearing of the meeting, but not being invited himself, crashes the party and finds himself facing hostility. Loki decides to cause trouble and begins insulting the other gods who, in turn, insult him back. Loki mocks each god, including Odin, until Thor arrives. Thor, threatening to knock Loki’s head from his shoulders for being so insolent, is the only one that actually manages to shut Loki up. Knowing that Thor is the only one would actually follow through on his threat, Loki leaves the hall and disguises himself as a salmon living in a waterfall. The other gods catch him and punish him for his crimes and the problems he has caused them. The end result sees Loki bound to a boulder, a snake hanging above him with its fangs dripping venom onto his forehead. His wife, Sigyn, holds a basin above him, catching the venom before it reaches him, but when she goes to empty the dish, bits of poison reach Loki causing him to thrash violently, causing earthquakes. There he stays until Ragnarok when he will be released along with his monstrous children.
One of the most interesting bits of Lokasenna is where Loki insults Odin, questioning the honors he has bestowed on faint-hearted warriors and, more specifically, charging Odin with ergi for practicing seidhr, woman’s magic. The first interesting bit is that Loki clearly engages in a number of unmanly activities, what with him turning into a female horse and giving birth to a foal. In Lokasenna, Odin mentions another story (which is unattested in other sources) wherein Loki becomes a milkmaid and gives birth to human children. Seems a bit hypocritical to be calling other people unmanly when he’s so fond of taking the female form and having children, but hey I guess it takes one to know one.

The second interesting thing is that there are stories about the chief of the Norse gods being labeled ergi, a pretty substantial charge as we discussed in the last blog post. There are a few possibilities as to why this even occurs. The first being that Odin was the chief of the gods, but not necessarily the most popular. Odin was a god to be respected and feared, the lord of death and war, but also of poetry and magic. You would respect Odin, but you wouldn’t necessarily invite him over for tea. By contrast, it’s likely that Thor was immensely popular with the common people (though I suppose you wouldn’t invite him to tea either). Where Odin is shrouded in mystery and a little bit of fear, Thor represents everything that is Norse. He is strong, manly, powerful. Stories about him can be funny, but they mostly depict him as a heroic figure to be loved and respected.
It’s also possible that Odin, being a figure of magic, is simply associated with all types of sorcery. Men’s magic, the magic of the runes, words, and poetry, is clearly the primary domain of Odin, but he is also capable of prophecy, has vast stores of hidden knowledge, wields magical weapons and possesses magical items, and is known to practice the little understood craft of Seidhr.
Ultimately, it’s probably a bit of both.
Whatever mysteries surround the subject of Norse mythology, one thing is abundantly clear:
Loki is absolutely ridiculous. 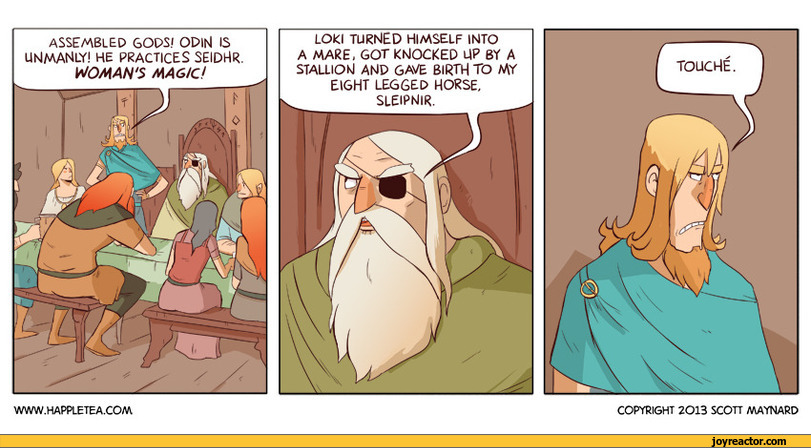 Details Those In Glass Houses
﻿ASSEMBLED GODS/ ODlN IS UNMANLY! HE PRACTICES SEIDHR. WOMAN'S MAG/C! LOfcCI TURNED HIMSELF INTO A MARE, GOT KNOCKED UP BY A STALLIOKJ AND GAVE BIRTH TO MY EIGHT LEGGED HORSE, SLEIPMIR. WWW.HAPPLETEA.COM COPYRIGHT 2013 SCOn MAYNARD
comics,funny comics & strips, cartoons,happle tea,Loki,magic